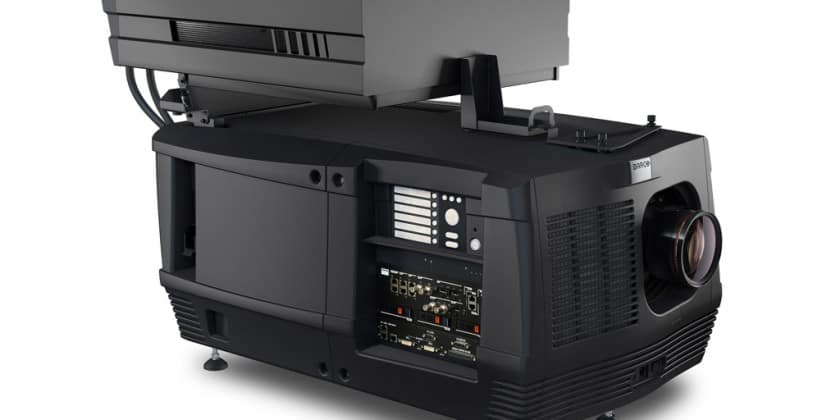 Underlining its status as the leading player in the Indian entertainment and cinema projection space, Barco showcased its high-contrast Flagship Laser projector DP4K-20LHC at the Big Cine Expo in Chennai along with Qube Cinema Technologies. Showcased at the Chennai Trade Centre, Barco DP4K-20LHC is amongst the most innovative and high-performance cinema projectors in Barco’s catalogue. Additionally, one of the Barco’s most cost-effective 2K Smart Laser phosphor cinema projectors, the Barco DP2K-8SLP was also featured during the expo days.

Theatre/multiplex owners and other visitors who attended the Big Cine Expo 2017 got a chance to witness Barco’s cutting-edge projection solutions which can enhance movie experiences and increase operational efficiency in their cinema halls.

The flagship laser high-contrast projector DP4K-20LHC powers superior colour saturation and delivers uniformity which makes it a perfect fit for premium entertainment applications. Its simplified operations allow it to be seamlessly integrated into existing projector setups, thereby greatly reducing the downtime and complexity for theatre owners. With a contrast ratio of 6,000:1 and high brightness levels, this ultramodern laser cinema projector is well-suited for mid-sized screens.

The DP2K-8SLP from the Barco Smart Laser Series delivers pristine images and ultimate reliability at a low total cost of ownership. It is designed to deliver the optimum performance for small screen applications.

Barco also participated in a panel discussion titled ‘The Next Generation Projection’ at the event, sharing insights about the future roadmap of projection technologies.

“Our state-of-the-art projection capabilities showcased at the Big Cine Expo demonstrate our leadership in the industry and the varied solutions we have for theatre owners and multiplex operators. We value our partnership with Qube Cinema and together we are set to deliver best in class digital cinema technology in India”, said Mr. Rajiv Bhalla, Managing Director at Barco Electronic Systems, India.

Harsh Rohatgi, President of Qube Cinema added, “Qube has been at the forefront of cinema technology in India and the world. In partnership with Barco, we are now introducing high-contrast flagship laser products. High-contrast projection offers a far superior viewing experience, with richer and more uniform colours. With our huge investment in content mastering and grading, relationships with film-makers and studios in India and Hollywood, Qube is uniquely positioned to provide high-contrast mastered content to go with this equipment. Our booth at the Big Cine Expo showcased the high-contrast laser experience with the Barco 20LHC flagship laser projector.”

Organised by Network208, Big Cine Expo is an international tradeshow and convention for the single-screen and the multiplex cinema entertainment community in India and South Asia. It brings together theatre owners, design consultants, equipment manufacturers, system integrators, project management professionals, industry stakeholders, and the user community, giving them an interactive platform to share technical expertise and explore mutual collaborations.

Barco, a global leader in professional visualization and collaboration technology, is moving to a state…

Barco, the professional visualization and networking solutions, was felicitated with the Technology Innovator Award at…

Barco, a global leader in professional visualization and networking solutions, has taken another major step…