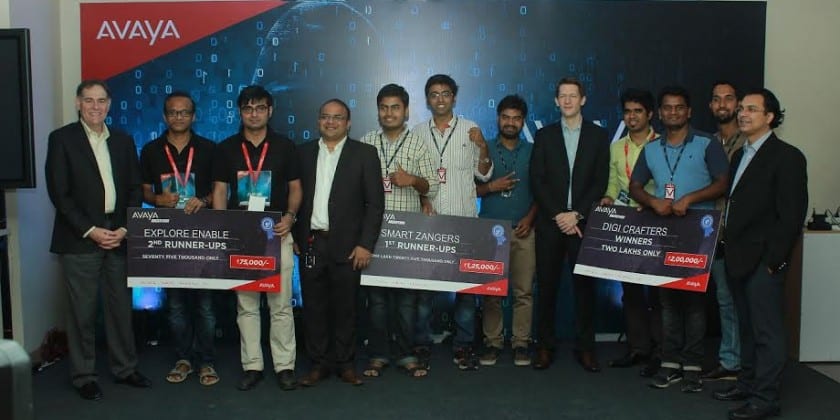 Avaya has announced ‘DigiCrafters’ as the winners of the company’s first Hackathon challenge, held at Avaya Pune R&D center.

The two-day event attracted a large group of developers and enthusiasts from universities, colleges and businesses across India.  Teams used platforms such as Avaya Breeze Client SDK™ and Zang™ Cloud, as well as the Avaya’s Vantage™ Device, to create smart applications aiming at supporting India’s digital objectives in industries including hospitality, healthcare, smart enterprise, smart city and open category.

A total of 482 teams participated, with 22 teams making it to the finals. The teams were awarded points based on complexity, creativity and impact as well as integration of the Avaya communication features. In the finals, the winning team, DigiCrafters, competed with ‘SmartZangers’ & ‘ExploreEnable’ team. The first-place team won a cash prize of Rs. 2, 00, 000, first runner-up’s prize was Rs. 1, 25,000 and the second runner-up was awarded Rs. 75,000.

The winning teams and their ideas are as follows:

First Prize:  A cash prize of Rs. 2, 00, 000 went to DigiCrafters who built an insurance application that solved practical challenges faced by the insurance industry. The team’s application aims to deliver instant communication between patients, service providers and insurers for an enhanced patient experience. Participants in the DigiCrafters team and winners of first prize are Alok Kulkarni, Tanaji Bhale and Imran Solanki.

Second Runner Up:  Team ExploreEnable, represented by Avirup Ganguly and Rishi built an application for that connects rural clinics to city hospitals, making clinics in remote areas connected to city hospitals with instant and contextual communication.

“It feels great to be honored for your creativity and innovation. Wining Avaya Hackathon holds a significant accomplishment in our career as developers. We are very grateful to Avaya for providing a platform of such a magnitude to enhance our skills and contribute towards building seamless applications for a digital era”, said DigiCrafters, Winning Team, Avaya Hackathon

“We are delighted to announce Avaya’s Hackathon winners today.  It’s been an absolute pleasure to see some of these most innovative and utility based applications created by these enthusiasts. We are glad that we provided them with this platform to showcase their ideas and inspire India’s developer community to build the next generation of communication-enabled applications that will help businesses meet the challenges of digital transformation. We congratulate all the participants and teams who were part of Hackathon, and we look forward to creating more opportunities for the tech and developers community to create unique and innovative solutions” said Gary E. Barnett, Senior Vice President & General Manager, Engagement Solutions, Avaya

The Avaya Happiness Index on Blockchain, which securely collects and automatically analyzes customer interaction data from…