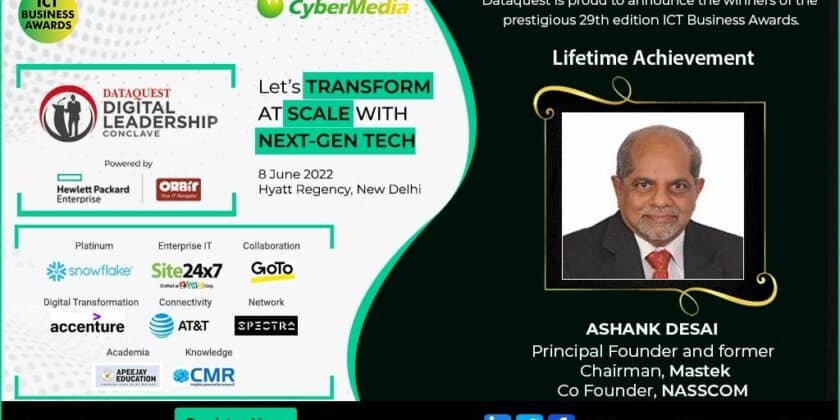 Ashank Desai, Co-founder, NASSCOM, Principal Founder & former Chairman, Mastek Ltd. was presented with the Lifetime Achievement Award 2021 at the 29th ICT Business Awards show. The award show was held during the Dataquest Leadership Conclave held at New Delhi’s Hyatt Regency on June 8. The theme of the conclave was Let’s Transform at Scale with NeXtGen Tech.

“We know him as the Principal Founder and Former Chairman, Mastek and equally strongly as the Co-Founder of NASSCOM. Desai is, in many ways and for many people, a venerable icon who has steered a pronounced transformation for the entire industry. He has rewritten the narrative of India’s muscle in many ways and teams, thus, fuelling the stratospheric rise of Indian innovation and IT power.

Without him, it is hard to imagine the rise of the Indian software sector and its irreversible global positioning during the 1990s. Earlier on, Mastek became a game-changer in aiming for, and cracking, the export market as a software player from India. Products like “MAMIS”—a manufacturing ERP, the big step of being the first software company to go public after liberalisation at “free pricing”, and models like People CMM—these are just some examples that resonate Desai’s strong vision and perseverance. He has been a key mind in laying down major initiatives taken by NASSCOM, for the advantage of Indian IT industry at many levels—and in a consistent way. He has also made innumerable contributions to the spirit of innovation as a charter member of The Indus Entrepreneurs (TiE).

On a parallel track, Desai also helps as a mentor to the Mastek Foundation, conceived with the mission of “Informed Giving and Responsible Receiving”. His social work track also entails many other causes and positive changes. Founding and funding Avanti Foundation, is a sterling example of how his vision and strategic flair could transform the lives of thousands of schoolgirls from low-income groups. Desai has many such endeavours that iterate his passion for real-ground impact. He has been a Founder and Co-Chairman at PanIIT Alumni Reach for India for vocational training that has trained thousands of high-school dropouts in rural areas.

His valued leadership has been underlined well with stellar recognitions—including the one from Prime Minster Narendra Modi for his contribution to NASSCOM and the IT Industry for the last 25 years.

What clearly stands tall in his vast journey, are such immeasurable amplifiers that he has heralded for the Indian landscape—beyond offices and IT associations. The Ashank Desai Centre for Leadership and Organisational Development at IIM Ahmedabad reflects his long-term horizon and passion to strengthen core facets of the industry. This centre galvanises various stakeholders towards the common goal of elevating research and results in leadership.

Desai has earned his MBA education from IIM-Ahmedabad and MTech from Indian Institute of Technology, Bombay.

The jury and organisers of the Dataquest ICT Business Awards 2022 are happy to honour his deep footprints in, and contribution for, the industry through the Dataquest Lifetime Achievement Award.”

Other award winners were: AtmaNirbhar Bharat Champion—Sridhar Vembu, Founder and CEO, Zoho Corp; The Pathbreaker of the Year—Falguni Nayar, CEO and Founder, Nykaa, and IT Person of Year Ajay Sawhney, former Secretary, MeiTY.