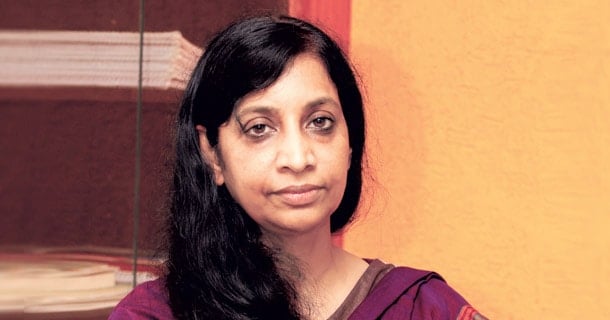 Past winners of the Person of the Year award include 2003 (Ratan Tata); 2004 (Mukesh Ambani); 2005 (Dayanidhi Maran); 2006 (Sunil Bharti Mittal); 2007 (Anil Ambani); 2008 (Srinath N – Tata Tele); 2009 (Manoj Kohli – Airtel); 2010 (Anil Sardana – Tata Tele); 2011 (Sanjeev Aga – Idea); 2012 (Sanjay Kapoor – Airtel); 2013 (Marten Pieters – Vodafone); 2014 (Himanshu Kapania – Idea Cellular); 2015 (Dr Rahul Khullar – ex Chairperson,TRAI); 2016 Gopal Vittal (Airtel); 2017 Mukesh Ambani (Reliance Jio).
According to Sandip Das, Jury chair, “The Voice&Data Awards Jury 2018 was unanimous in its recognition of the leadership and visionary role that Aruna Sundararajan has played during  an extremely challenging time in the life of Indian Telecom. Under her leadership , it was an inclusive approach carrying all stakeholders in a diverse telecom industry with her open, accessible, objective balanced and forward looking approach to accelerate the nation’s march towards becoming rapidly digital, creating  a conducive environment where adoption of contemporary technology was critical in expediting the closure of the yawning digital divide that has plagued our nation.”

Under her tenure as DoT secretary, there was a six fold increase in public spending on telecom infrastructure and services over the last few years. And the tele-density is now up from 75% in 2014 to over 91% in 2018 with an addition of over 280 million new subscribers. The other major milestones include the five plus times growth in broadband access and India becoming the highest mobile data consuming nation globally at 1.3 Billion GB per month; completion of BharatNet phase 1 where OFC coverage went up from 7 lakh km in 2014 to 14 Lakh km in 2018 being rolled out at the phenomenal rate of 200-800 kms per day, and reaching over 1 Lakh Gram Panchayats connected by 2018; formulation and passing of NDCP 2018 that covers important aspects including emerging technologies such as IoT, AI, M2M; Ease of Doing Business; Spectrum Sharing, Trading & Harmonisation; connecting uncovered areas of NE, LWE, A&N Islands; and the WiFi Hotspot initiative; and the setting up of the “Forum for 5G India 2020″ headed by the renowned Prof Paulraj to work out the spectrum & regulatory policies; awareness promotion programs, and build up applications and use cases, and pilot trials. Sundararajan also broke the glass ceiling by becoming the India’s first woman DoT Secretary two years ago

The Voice&Data Awards 2018 will be presented on 13th March 2019, in New Delhi at the Telecom Leadership Forum conference.

The conference theme this year is ‘Digital Disruption and Consolidation”, and the various sessions in the form of keynote speeches, panel discussions and case study presentations will address issues facing the telecom sector such as what does the Indian telecom ecosystem (operators, equipment and solution vendors, apps players, policy makers and regulator) need to focus on in the next 12 months in the wake of the data wave, the consolidation, and the user’s changing profile and requirements. And how will today’s consumer look like 5 years from now; and how are emerging technologies like digital, AI & VR are going to be leveraged to cater to the evolving customer needs. The conference will also focus on how the telecom sector and eco-system need to align itself for meetings demands of a diverse, growing, quality and cost conscious, data driven, and highly competitive market.

Posted by: Ibrahim Ahmad
View more posts
Aruna Sundararajan is the Telecom Person of the Year 0 out of 5 based on 0 ratings. 0 user reviews.
VIAVI to Showcase 5G Network Testing and Assurance Portfolio at MWC 2019
The Magic Ingredients to make a Digital Workspace