The year 1985, Steve Jobs who was unceremoniously fired in a boardroom coup, was again hired back in 1997; the company was in dire straights then. Apple was on the verge of bankruptcy.

After 21 years ( the time that transported Apple to new heights and it became a religion and MAC, a cult, and Steve Jobs, a tech legend) Apple has achieved a feat that places it on  the pinnacle of glory- its marcap today stand in excess of $ 1 trillion, a moment of hubris for the Apple consumers.

It’s interesting to note that Apple as the Iconic tech bellwether has become the first public company in the world to be valued at $1 trillion. Apple has taken the pole position in the marcap battle locking horns with Amazon, and Alphabet.

For a company that launched its revolutionary iPhone first generation way back in June 2007, and probably created the first Smartphone and in the years its products went on to become aspirational devices for millions across the world.

Ever since iPhone 1 was launched in 2007, Apple took on to a daring road by creating path breaking device form factors, while others struggled. Its ability to manage functionality and slimness defines all its products across desktop and notebook and mobile form factors. A testimony to that innovation relates to cult products such as MacBook Air (first launched by Jobs in 2008, as he pulled the device from a Manila envelope to demonstrate how thin and light it is).

SEAMLESS BLEND OF SOFTWARE AND HARDWARE

Looking back, Apple like any other tech company, started in a humble way by Steve Jobs and Steve Wozniak in 1976. They launched Apple Computers and created Apple 1 in 1976. In its 42-year journey, Apple has had an amazing run. 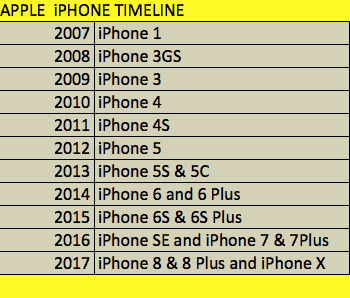 The Road to Apple’s glory is the ecosystem it has created in the market and its ability to seamlessly marry hardware and the software. Its path breaking ‘AppStore ‘ concept for iOS devices was first launched in 2008, one year after iPhone 1, and incidentally, the AppStore has completed one decade this August and what started off with 500 apps in 2008 has graduated into a store with more than 2 mn plus apps across iOS devices.

To give a sense of how big Apple is right now, let’s look at what Ron Davies wrote in Guardian, “ Apple’s stock market value is more than a third the size of the UK economy and larger than the economies of Turkey and Switzerland”.

Clearly one of Apple’s critical success factors also relates to its well oiled top management. When Steve Jobs passed away in 2011, even before his passing, Tim Cook took over as CEO and Jobs was able to see this transition just before his death. In a way, this has given the company a solid direction and a multi-year roadmap.

When it comes to innovation, Apple has been criticized in the recent years that it is rather slow to adopt some new innovations when compared to it Android counterparts like Samsung. But in the end, Apple was able to sway the market and able to double up in the last 2 years on the innovation quotient.

Tim Cook has taken Apple to its current state of glory from 2011, the time in which Apple launched its iPhone 4S, the last of the Steve Jobs era phone and iPhone 5S was an inflection point in power, performance and form factor industry wise as well as for Apple.

Since then, Tim Cook was able to leverage Apple’s inherent product strengths and expanded into services such as Apple Music, one of the big revenue earners for the company today. Cook is also escalating Apple’s emerging markets play and India is well poised as one of the ‘must watch’ regions for Apple in the days ahead.

At the end of the day, when Cook sent out a memo to Apple’s 120,000 employees on the $1tn achievement, he clearly took a humble tone and downplayed it, but thanked the employees. This in a way shows the practical view of things that indicators like marcap are a double-edged sword and in one slip it can slide back.

Notwithstanding the future challenges, Apple right now is on cloud nine, a well-deserved glory for the state of the art tech products it brings to consumers.

Apple has hired just departed AI and search chief, John Giannandrea, to head up its…