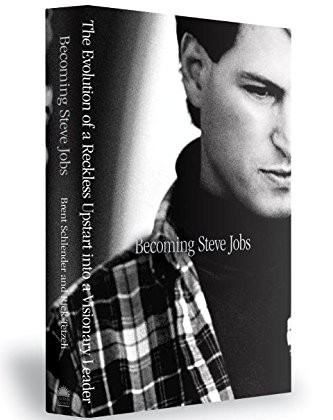 Steve Jobs attracts the media like a magnet. Even after his death, the cult of Jobs is a mystery trapped in a enigma waiting to unfold. But may be something about Jobs will change with a new upcoming book on him – ‘Becoming Steve Jobs: The Evolution of a Reckless Upstart into a Visionary Leader’. Authored by seasoned reporters Brent Schlender (a former journalist at Fortune magazine) and Rick Tetzeli (executive editor at Fast Company).

This looks like a bestseller even before it getting published. While the book is expected to be released only by coming March 24, but numerous leaks doing the rounds on the Internet indicates that this is going to be yet another intimate book on Jobs. The book going by the rumours gives many stunning revelations about the amazing professional and personal equation Jobs shared with some of the select few top brasses at Apple.

According to Cult of Mac, it said, “The writers scored interviews with major players including Tim Cook, Jony Ive, Eddy Cue, Pixar’s John Lasseter, Disney CEO Bob Iger and Jobs’ widow, Laurene Powell Jobs. The result is a book loaded with interesting anecdotes and insights about the former Apple CEO.

It is in this context, ‘ Becoming Steve Jobs’ tries to deconstruct Jobs in a new light. The human side of Jobs, unlike Walter Issacson’s autobiography which gave a brutally honest view of Jobs and his working style and his ego-maniac side.

Some damning revelations from the book:

Unlike Jobs many things about Tim Cook remain hidden from public glare. But probably one of the explosive statements in the book relates to Tim Cook offering part of his liver to Jobs when he was at end stage liver disease. But it seems Jobs refused, fearing for Cook’s own life.

While this was in the rumor mills for a long time, the book seems to give details on how Steve Jobs and Disney’s head Bob Iger discussed on buying Yahoo together and jumpstart Apple to foray in the search business.

Clearly this is just another Steve Jobs book, but the difference is it attempts to humanize Jobs. And moreover the anecdotal narrative is what is going to make this book an interesting read.