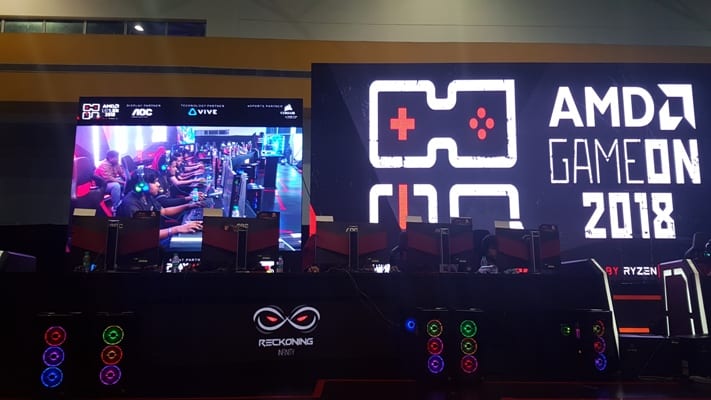 Addressing the event, Jayesh Ranjan praised AMD for making GameOn a flagship Hyderabad event and bringing the best of gaming technology to the enthusiasts in the city. Andrej Zdravkovic said, “Through GameOn, we want to showcase AMD’s deep commitment and support to the development of PC gaming and eSports industry in India. We have a very strong team of Radeon Technology Group here in Hyderabad and this event is organized by this highly talented and innovative team. If you see our products on display, whether it is console games, gaming notebooks, AMD powered gaming rigs, VR gaming – there is a part in each of these products that is developed in India”.

The Two-day LAN party saw about 3000 gamers register to compete in various tournaments including CSGO, DOTA 2, PUBG, Fortnite and many console games. The winners walked away with USD 10,000 worth prize money.

The CSGO tournament was won by OpTic India Gaming and the DOTA2 championship was bagged by Playmax Interactive team – Wipeout. Over 140 clans across India had registered for these tournaments. AMD also conducted an all India, MOD (Make your Own Device) challenge and Hyderabad based, Sohail won an HTC Vive for building the best gaming rig.

AMD also hosted a job centre where visitors interacted with engineers and HR team members to understand what it means to work at AMD. Over 200 people applied for roles in the organization by uploading their resume using a QR code.

Shortlisted candidates will get invited for an interview in the coming days and they stand a chance to be part of the incredibly talented and innovative AMD team that is spearheading the next wave of gaming hardware and software technology.

Why Teenagers are Vulnerable to Blue Whale Challenge

These days teens are feeling more lost than ever. They have working parents and kids…

Unity Technologies announced that Unity 2017.1 is now available to download from the Unity Store.…