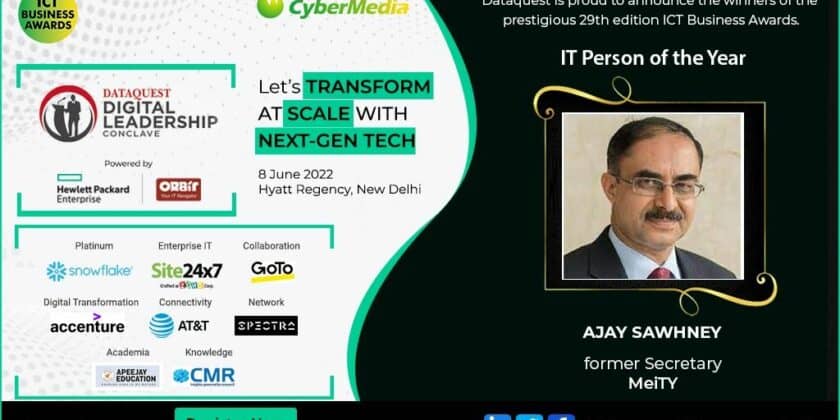 Ajay Sawhney, former Secretary, MeiTY, was presented with the IT Person of the year Award at the 29th ICT Business Awards show. The award show was held during the Dataquest Leadership Conclave held at New Delhi’s Hyatt Regency on June 8. The theme of the conclave was Let’s Transform at Scale with NeXtGen Tech.

“The story of how a Mechanical Engineer and an IAS Officer of Andhra Pradesh cadre (1984 batch) went on to carve India’s stronghold on the global IT Map—that’s truly inspiring and fascinating.

While he emerged into spotlight due to his distinguished work in shaping the conceptual model and development of IIIT Hyderabad, what deepened his calibre was expertise and results across diverse on-ground issues. In his early years, Sawhney picked up fundamental insights and pragmatism by working in Andhra Pradesh, across multiple areas like land administration, law and order and quasi-judicial functions, rural development, health and family welfare, communication and information technology, e-governance and elections.

His journey towards MeitY added many more arrows in his quiver, thus propelling India higher and higher in a space that was otherwise ruled by global players. He is also remembered well for corralling investments from major IT corporations towards India and augmenting the capability of the Indian industry for global frontiers.

He has been driving the formulation of innovative policies and implementation of several major e-governance, communications and broadband projects. And of course, his core-level work in the National e-Governance Division, the Aadhaar initiative, BHIM and UPI endeavours—all that have actually paved a strong and confident path for India’s digital journey. He has been an integral part of India’s Data and Social Media policies.

Today India reigns strong not just in the software space but in electronics and hardware too—thanks to veterans and trailblazers like Sawhney.

While the whole world reeled with the pandemic along with India in 2020, we bounced back in 2021 in India thanks to the strong digital foundations. The ICT backbone of the country helped India get back on its feet and a big role in all of this was played by MeiTY and of course, Sawhney.

We are very pleased to felicitate his long and limitless journey with the Dataquest IT Person of the Year Award.”

Posted by: DQI Bureau
View more posts
Ajay Sawhney presented with the Dataquest IT Person of the year Award 2021 0 out of 5 based on 0 ratings. 0 user reviews.
University of Arizona introduces MS in Information Science: Machine Learning with Great Learning
The Make in India Waistline— Every inch counts!

The iGaming sector has grown significantly over time, driven by the implementation of newer technologies…

Tech predictions to watch out for in 2023

Technology continues to be a key enabler of an evolving world, developing at a rapid…