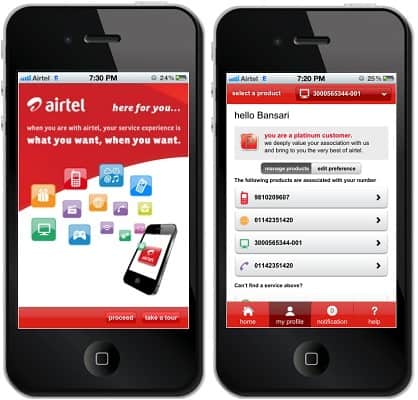 Bharti Airtel (“Airtel”), an India’s telecommunications services provider, announced the launch of a new version of MyAirtel App that will offer the best of web to users through a curated set of apps for all their mobile application needs.

In addition to its self-care features, the relaunched MyAirtel App will now have a ‘Airtel Apps’ section that will have a collection of top apps under a single interface. Ditto TV with 100+ LIVE TV channels and popular TV shows will be available without any subscription charges, Hike Messenger app, Wynk Music and Wynk Movies, Juggernaut are some of the apps available within ‘Airtel Apps’.

There are also two new apps from the Airtel stable – Airtel Cloud and Airtel Dialer.  Airtel Cloud provides 2GB of free cloud storage and back up. What’s more, there are no data upload charges for the scheduled overnight backups for prepaid customers currently and this benefit will be made available to postpaid customer soon. Airtel Dialer offers 50 minutes of free Airtel-to-Airtel calling benefits, in addition to its call management feature.

Customers who already have MyAirtel App on their smartphone can update to receive the new features, while new users can download the new MyAirtel App from Google Playstore (for Android) and App Store (for iOS).

Harmeen Mehta, Global CIO & Director – Engineering, Bharti Airtel said, “As part of our Digital Airtel initiative we are excited to bring you the new avatar of the MyAirtel App, which now offers a unified interface to the entire suite of our popular mobile apps and several new ones. All these apps have been curated to ensure customers are offered the best of the web, with more exciting apps and partnerships coming in the near future. We would love everybody to experience the new version of myAirtel app and join us in making it better and better.”