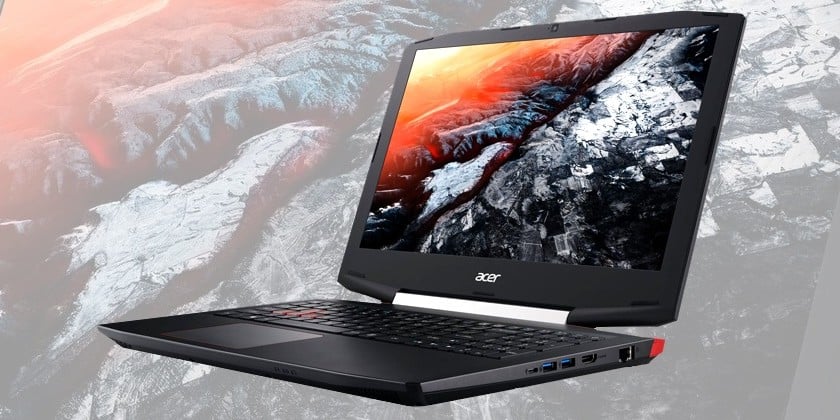 Both notebook series come with up to a 7th Generation Intel Core i7-7700HQ processor that is claimed to be designed to bring incredible performance and responsiveness, immersive 4K entertainment and longer battery life to mobile devices. The chipset is the perfect match for the notebooks’ equally impressive GPUs, the latest NVIDIA GeForce GTX 1060 or 1050 Ti graphics1.

The Aspire V 17 Nitro Black Edition featuring a 17.3-inch display is available with optional integrated Tobii eye-tracking hardware that when combined with touchpad gestures, enhances productivity and makes the device more responsive through the use of eye movements. Users are able to more quickly and conveniently navigate across apps and programs with a simple glance. Gaming is also enhanced with eye tracking, creating deeper immersion and allowing gamers to aim, shoot and explore freely using their eyes in over 45 titles like Elite Dangerous, Deus Ex: Mankind Divided and WATCH_DOGS 2.

The sleek Aspire V Nitro Black Edition models are the for those seeking high-quality entertainment on a notebook. Under the aluminum cover, Acer combined 7th Generation Intel Core processors to drive performance and the latest NVIDIA technologies, starting with up to a NVIDIA GeForce GTX 1060 graphics card with 6GB of dedicated GDDR5 VRAM1 and up to 16GB of DDR4 system memory, upgradable to 32GB using two soDIMM modules. They also come with a NVMe PCIe Gen 3 or SATA SSD1, and a HDD1 of up to 2TB capacity for additional storage.

Connectivity comes in the form of a USB Type-C port with Thunderbolt 3 for speeds up to 40 Gbps and support for dual 4K video output simultaneously, two USB 3.0 ports (one featuring power-off USB charging), two USB 2.0 ports, and HDMI connection. It connects wirelessly through 2×2 802.11ac MU-MIMO technology, while a Gigabit Ethernet port is available for wired connectivity needs.

The new Aspire V Nitro notebooks come with a fingerprint sensor embedded in the top left corner of the Precision Touchpad. This enables Windows Hello, allowing a more secure password-free sign-in with a touch of the finger.

The high-quality entertainment experience is also driven by the audio technologies featured on the Aspire V Nitro, including four speakers tuned with Dolby Audio Premium and Acer TrueHarmony Plus technology. Acer TrueHarmony Plus delivers more accurate, clear sound reproduction and a wider bass range with an advanced paper cone speaker design framed by a foam material. Skype for Business Certification ensures people can communicate with crisp and lag-free quality, and also allows for clearer, higher quality audio and a great Cortana with Voice experience on Windows 10.

The Aspire VX 15 features large cooling vents and an edgy red chassis. The iron red backlit keyboard makes sure gamers are always striking the right notes during gameplay, while also providing a hardcore look and feel without that hardcore price-tag.

The 5.5lbs (2.5kg) Aspire VX 15 also comes with up to a 7th Generation Intel Core i7-7700HQ processor, offering significant improvements in performance over preceding generation processors, all the while providing lower battery consumption. The notebook also comes with up to NVIDIA GeForce GTX 1050 Ti1 graphics with GDDR5 VRAM (delivering up to 32GB/s bandwidth).

Offering up to 16GB1 DDR4 memory out of the box and can be user-upgradeable to a maximum of 32GB. Storage is provided by a 512GB SSD and 1TB HDD1.

Keeping all this running at optimal temperatures are the dual fans, installed to ensure however much you push it during a gaming session, your machine is up to the task and will support you with super-smooth gameplay. That gameplay experience is further supplemented with high-definition audio with Dolby Audio Premium, as well as Acer TrueHarmony sound and Skype for Business certification, and boasts great visual clarity with a 15.6-inch Full HD IPS screen2.

For those seeking out additional capabilities that only a desktop model can offer, Acer created the Aspire GX series desktop PC. These VR Ready1 PCs come equipped with up to 7th Generation Intel Core processors, up to 64GB of DDR4 RAM, and up to NVIDIA GeForce GTX 1070 graphics. What’s more, they’re capable of delivering 4K1 resolution visuals and support up to 41 displays at once for maximized gaming experiences. Also, there’s no shortage of storage with up to a 3TB1 HDD and a 256GB SSD, and sports a handy Wireless Charging Deck1 for keeping users’ mobile devices powered up and ready to go. The GX series features a edgy armor-inspired housing with front-facing LED lighting that emits a sinister red glow.

Worldwide shipments of devices — PCs, tablets and mobile phones — are on pace to record 0.9%…