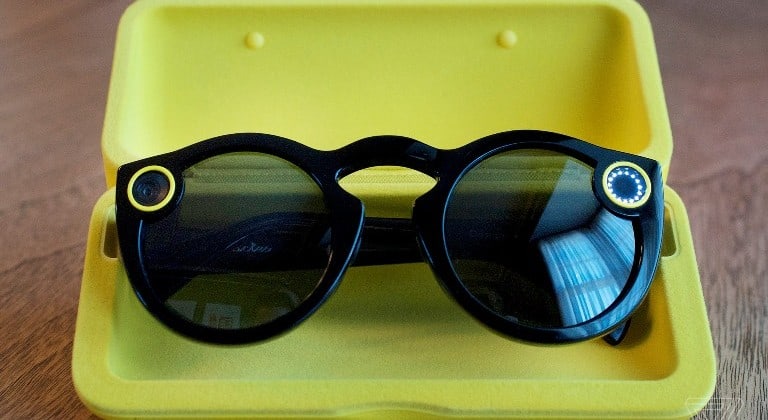 Wearable camera glasses have been invented in the past but they have only been a piece of technology. None of the existing wearable glasses have been a success in the fashion world. When tech is wearable, it has to look good or one might look like a social misfit wearing hi-tech glasses which only serves the purpose of technology and look silly when worn, especially on face. Google Glass is one example which made the news of being a fashion failure in the wearable tech segment.

On the other hand, Snapchat Spectacles seems to have a contemporary design. Snapchat, rebranded as Snap Inc. has come up with a wearable camera called Spectacles. Available in only 3 color variants- black, coral and teal, the Spectacles have a single button on them to start and stop recording. The frame of the glasses also sports a ring of miniature LEDs which gets lit up when recording button is pressed.

Spectacles are sunglasses which record 10 second circular videos with 115 degree wide lens through integrated video camera. The videos recorded on Spectacles are automatically transferred wirelessly to Snapchat memories. Later, these videos can be edited with Snapchat’s editing tools to post on story. These glasses can be purchased from traveling wending machines by Snap Inc. called Snapbots. They can be spotted on online maps which specifically provide the location of these Snapbots.

Much like Apple’s AirPods, Spectacles also come inside a case which doubles as a charger. Snap Inc. claims that the case can hold up-to four hour charge which can be charged through a magnetic charging cable. Posing as a two in one purpose of sunglasses as well as smart wearables, Spectacles are priced at $130. Although one disadvantage at this price range is the lack of being water proof. Apart from this, a big disappointment is that Snapbots are neither available online, nor in India.

Smartron has announced the launch of their first wearable device, the tband. With first of its…

magicpin, the local discovery and commerce platform has tied up with Mcdonald’s, The Beer Café,…

Gone are the days when companies used to hire candidates through job portals. McDonald’s, the…