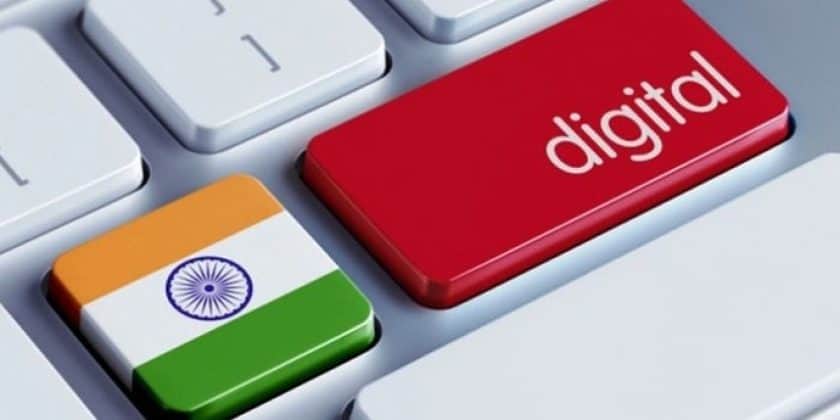 Information technology and communication technologies have huge potential to provide new opportunities and challenges for developing economies. Since the wave of liberalisation in the 1990’s, India has harnessed technologies along with vast economic reforms to open up Indian markets to global businesses and investments. However, in the recent past, the Indian leadership’s focus on amplifying digitisation has deepened and they have begun to acknowledge the potential to transform India into a true technology leader.

Potential of the Indian digital economy

It is estimated that India’s digital economy has the potential to become a 1 Trillion USD ecosystem by 2025. This will have multiple positive consequences, from an increase in jobs to foreign investment, growth of domestic digital infrastructure, the rise of small and medium businesses and an overall enhancement in the country’s economic growth. However, there are many hurdles in India’s path to becoming a 1 trillion-dollar economy such as a rampant digital divide, varied demographic profile and underdeveloped technology infrastructure. However, The Government of India has realised that it is important that their policy measures are contemporaneous with the underlying challenges of the digital ecosystem and are forward looking in nature. A first step in this direction was the Digital India, that amplified pre-existing approaches along with newer targeted schemes.

Digital India was a campaign launched by the Government of India under the aegis of the Ministry of Electronics and Information Technology, on July 1st, 2015, to ensure the delivery of Government’s services through electronic media. The core vision of this initiative as per the Government is divided into three broad aspects – digital infrastructure as a core utility for citizens, governance and services on demand and the digital empowerment of citizens. The initiative includes plans to develop better digital infrastructure in rural areas and boost the existing digital economy. Since its inception the Government has been consistently scaling the Digital India initiative, they increased the outlay for the programme by 23% to Rs. 3,958 crore for the year 2020-21. This increase is likely to contribute to scaling our electronic manufacturing industry, facilitating research and development and strengthening cyber security and data protection frameworks.

It has also initiated the ambitious Bharat Net programme, that undertook the task of connecting 2.5 lakh gram panchayats by fibre-optic network and has achieved around 1,40,000 connections thus far. Promoting digital inclusion is also a core component of the initiative with programmes like Common Service Centres (CSCs) that enable the delivery of digital services through the internet in rural areas. The scheme also works to promote employment in rural areas in digital and allied services.

The initiative also focuses on tapping into the potential of the digital startup ecosystem, as India is home to 9,300 tech-startups which makes it the third largest tech startup ecosystem in the world. A large number of these startups dabble in niche areas in technology like AI, Blockchain, analytics and cybersecurity. In order to create a conducive ecosystem the MeitY has launched programmes like TIDE (Technology Incubation and Development of Entrepreneurs), promotion of ESDM (Electronics System Design and Manufacturing) Skill development and the setting of incubation centers  that are working to promote indigenous technology. The growth in the e-commerce market, which is estimated to be worth $54 billion in 2020 is testament to the Government’s efforts.

The Government of India has also collaborated with major technology companies worldwide to realise its vision. Google Inc. collaborated with the Indian Railways to set-up free Wi-Fi services at 100 major railway stations in India. Google worked in tandem with RailTel, an Indian PSU, that deals with optic-fibre networks along railway tracks in India that will be used to provide these Wi-Fi services. Microsoft Inc. has worked with the Government of India on the Digital India Initiative, with their most recent contribution being the “Digital Governance Tech Tour”. This is a national programme that helps deliver critical AI and intelligent cloud computing skills to Government officials in charge of IT across the nation.  The scheme has also received steady investments over the years.

There is no doubt that the Digital India Initiative has been a huge success in its first five years. However, it is imperative that an accelerated focus is placed on certain core components such as enhancing digital literacy and accessibility to truly realise the potential of India’s digital economy. Though the Government has developed state of the art systems and schemes, it is important to ensure that these systems are prepared for interoperability across the board. The Government must invest in focus areas in e-Commerce, data processing and tech start-up ecosystem.

It is also important to acknowledge that the schemes and initiative under Digital India don’t operate in a vacuum, it is important to create strong legislative and administrative frameworks to facilitate the realisation of this vision. There is a need for India to strengthen its cybersecurity frameworks and promote informational privacy of citizens on an urgent basis. The Personal Data Protection Bill, 2019, that is presently under consideration by the Government, is a step in this direction and will help India to protect and secure its digital interests and rights.  It is also time for India to forge digital policies that are tailored made for the Indian scenario and tap into the vast treasure trove of technical competence at India’s disposal.

Posted by: DQINDIA Online
View more posts
Tags:‘Digital India’ program
5 years of Digital India – How far have we come? 5 out of 5 based on 1 ratings. 1 user reviews.
Excellence in any particular field is not dependent on gender: Megha Yethadaka, Uber
ICMR Recruitment 2020: Online Applications Invited for 22 Vacancies, Salary up to Rs 48,000

Innovative work of Digital India has led to IP generation

Digital India turned 5 years on July 1, 2020. We asked the industry regarding their…

Lenovo brings its ‘Start up with Lenovo’ to Karnataka

2 responses to “5 years of Digital India – How far have we come?”